As the opening of the film states, this is based on the true story of William Wilberforce, a man who changed history, ending the slave trade in Britain. Which, being American, we don’t tend to consider slavery elsewhere.

“By the late 18th century, over 11 million African men, women, and children had been taken from Africa to be used as slaves in the West Indies and the American colonies. Great Britain was the mightiest superpower on earth and its empire was built on the backs of claves. The slave trade was considered acceptable by all by a few. Of these, even fewer were brave to enough to speak against it.”

The film features Ioan Gruffudd (he appeared as a minor character in James Cameron’s Titanic, was the titular Horatio Hornblower in the miniseries, Lancelot in the 2004 King Arthur movie, and Reed Richards in the first two Fantastic Four movies) as William Wilberforce, Benedict Cumberbatch, before he landed his hit roles, as William Pitt, Michael Gambon (Dumbledore after Richard Harris passed away) is Lord Charles Fox, Rufus Sewell (Tristan and Isolde and Knight’s Tale) is Thomas Clarkson, Ciarán Hinds (Mance Rayder in Game of Thrones) is Lord Tarleton, and Toby Jones (Dr. Zola in the MCU, the voice of Dobby in Harry Potter, the Dream Lord in an episode of the Eleventh Doctor’s run in Doctor Who, he also appeared in Ever After) is the Duke of Clarence.

The movie jumps back and forth between “present time” while William is trying to rest and heal from colitis, and recounting how he’s gotten to where he is. William’s cousins take him to Bath to take the mineral water; and set him up on a date with Barbara Spooner. She’s intrigued to meet him; she supports his abolitionist work, but he doesn’t want to talk about it. He begins his tale fifteen year prior where he is playing cards at a club after a day in the Parliament. His opponent, the Duke of Clarence tries to offer his slave as payment during a game. Wilberforce [of Wilber as he is referred to during the movie, to avoid confusion with William Pitt] refuses. Wilber and Pitt discuss how, as young politicians they want to change the world. Wilber is reminded of a song his old preacher wrote, a former slave captain, he found God and wrote Amazing Grace. Wilber enters the room again, Pitt silences the men, and Wilber sings [behind the scenes note: that was Ioan actually singing (I am not surprised, he is Welsh, and Wales is filled with wonderful singers)].

Wilber debates at that time whether he should enter the political field, or devote his life to God. Pitt wants him by his side when he plans to become Prime Minister; the youngest in history. “We’re too young to realize certain things are impossible,” and we do them anyway. Pitt arranges for Wilber to meet other abolitionists and Equiano. Wilber even visits his old preacher for advice. The preacher supports Wilber entering politics (as someone at the dinner suggested, Wilber should do both). He has work to do, taken on the other members of Parliament. We jump back to Wilber fighting his illness. He takes opium to counter the symptoms. Barbara returns for a meal and they are sent outside to talk. Wilber feels like he failed his task. Every year, he presented a bill, and every year it failed. 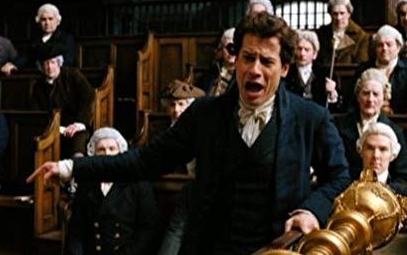 He continues to speak of the early years. He gave a tour of the docks to shock the aristocrats with the horrors of slavery. Equiano published his account. They had a petition signed by 390,000 of the common people, and Lord Charles Fox of Parliament. This is after Lord Tarleton states there is “no evidence the Africans themselves have any objections to the trade.” (Yeah, I doubt that evidence). Wilber shouts back “no matter how loud you shout, you will not drown out the voice of the people!” Tarleton scoffs at the notion of the people. The bill failed the first year. Five years in, there is talk of revolution in Europe, spurred by the American colonies. And opposition, in the form of abolition teeters dangerously close to sedition in those times. Barbara argues that now is the time to regroup, the war with France is being won and when people stop being afraid, they remember their compassion.

Barbara and Wilber find they are both prone to impatience and rash decisions. They get married. Wilber gets his voice back, and his friend. As Wilber’s Prime Minister, Pitt urges caution. He is friend, to hell with caution. Wilber’s preacher has finally published his account of his years slave trading. He urges Wilber to use it, and damn the people with it. Wilber gathers the team back together. A lawyer amongst them suggests they cheat. First, they take away slave ship’s protection of a neutral flag, tying it in with the war effort and it is brought up by someone not part of their inner circle. And the opposition has been given free tickets to the races, so the bill is sure to pass. Pitt, who is gravely ill himself two years later, makes sure his successors will back Wilberforce.

Everyone is in attendance when the final vote is taken. The “Home and Foreign Slave Trade Act, the unamended bill calling for the abolishen of the slave trade throughout the entire British Empire,” 283 to 16, passes. Cheers erupt. The Duke of Clarence tells his friend Lord Tarleton of noblis oblige; his “nobility obliges me to recognize the virtue of an exceptional commoner.” Everyone stands and applauds Wilberforce. “William Wilberforce continued to battle injustice for the rest of his life. He transformed the hearts and minds of his countrymen on education, healthcare, and prison reform to accomplish his second great dream – making a better world.” Bagpipes play the tune Amazing Grace as the film finishes. “William Wilberforce continued campaigning until his death in 1833…he is buried in Westminster Abbey next to his friend, William Pitt.”

I find this film uplifting. I cheer for Wilberforce through all the setbacks. It also reminds me why I hate politics, whatever the form. There are several points I want to cry; when William Pitt dies, as Wilber’s best friend. When the bagpipes play Amazing Grace. When Wilberforce finally wins. It’s a great cast, full of wonderful actors. Ioan was stupendous; I prefer him in this sort of role rather than Mr. Fantastic (though he’s not bad there; we’ll cover that once I get into the superhero movies). Overall, a good movie. Just not one to put on if you’re not in the mood for a little heartache.

Up Next: The American Civil War, starting with Gods and Generals