My high school performed this musical my sophomore year; freshman year was 42nd Street, but I did not make cast, so I worked as stage crew…which was an interesting experience. My brother was the train conductor and the sheriff, our neighbor was Tommy. Brandon from church was Mayor Shinn, Chelsea, also from church, was Mrs. Paroo. If I recall correctly, the guy who played Professor Hill has never been in a show or even choir before he got the role. I was simply in the ensemble [and also wore costumes that did not go with my complexion…we rented costumes and backdrops from New York so those people at the warehouse were only paying attention to size]; some of the girls who could pull off looking younger played children and they borrowed band uniforms.

The 1962 film stars Robert Preston as Professor Harold Hill and Shirley Jones (the mother of The Partridge Family) as Marian Paroo. I recognize Mary Wickes (White Christmas, Aunt March in 1994’s Little Women, she voiced the gargoyle Laverne in Hunchback of Notre Dame and appears in The Trouble with Angels and Sister Act) as Mrs. Squires. A young Ron Howard (after he began on The Andy Griffith Show and long before Happy Days and then the days he started directing and producing movies) is Winthrop Paroo.

Rock Island opens the show with the salesmen keeping time with the train as it speeds up (oh, and check out a video of Hugh Jackman doing it; he auditioned with the song once and is due to star in the show on Broadway). The salesmen discuss their trade and then Professor Harold Hill is brought up as the worst kind of salesmen with empty promises. The train stops in River City, Iowa. Hill happens to have been on the train and gets off to try to sell a boys’ band to the unsuspecting town. Iowa Stubborn explains the people’s viewpoints: “a special chip on the shoulder attitude;” the American Gothic couple even shows up. Hill discovers one of his old friend is in town and enlists his help. What’s new that he can paint as bad so that parents will pay for their sons to enter a boys’ band. There is a new pool table; Hill uses it. “Ya Got Trouble, right here in River City, with a capital ‘T’ that rhymes with ‘P’ that stands for ‘pool’.”

Hill’s next step is to cozy up to Marian Paroo, the local piano teacher and librarian, but she does not fall for any of his lines. Her mother on the other hand is worried that Marian will end up alone (they get in an argument in tune with student Amaryllis’s piano exercise). Amaryllis also has a crush on Marian’s younger brother, Winthrop, but laughs at his lisp. Marian encourages Amaryllis to sing Good Night, My Someone until the right man comes along.

The town gathers for a patriotic day and we meet Mayor Shinn, and his wife, Eulalie Mackechnie. Mayor Shinn is a little bumbling, but tries to keep order. [My brother, as the sheriff had to practically tackle Tommy because he ran a little too fast and was almost off stage; it was funny.] Hill stops by and riles the crowd up about the pool table and breaks into 76 Trombones, painting an exciting picture of a shiny marching band in town. Mayor Shinn instructs the school board to get the man’s credentials. But Hill manages to distract everyone whenever the subject is brought up. He turns the bickering school board into a barbershop quartet. He takes in Tommy, a local troublemaker and hooks him up with Shinn’s eldest daughter (they were already seeing each other). Hill claims to be a graduate of “Gary Indiana Conservatory, class of aught-five,” and the way the boys will learn their music is a revolutionary idea called the “think system.”

Hill even charms Eulalie Mackechnie Shinn and her gossip ladies to form a dance group so they won’t bug him about his credentials. They also Pick-a-little, Talk-a-little about Marian Paroo and how “she made brazen overtures” to old miser Madison (whom half the buildings in town are named after). “He left River City the library building, but he left all the books to her.” The ladies feel that Marian’s suggestions are dirty books (like Chaucer, and they emphasize Balzac). Hill is intrigued by the idea and remarks to his friend later that he prefers the Sadder, but Wiser Girl. [The lyric “I want Hester to win one more “A” was a bit funny for the sophomore class, since we read The Scarlett Letter that year in English class (and analyzed it to death)]. So Hill heads over to the library to flirt with Marian. He claims “I love you madly, madly, madam librarian, Marian!” Marian keeps shushing him. 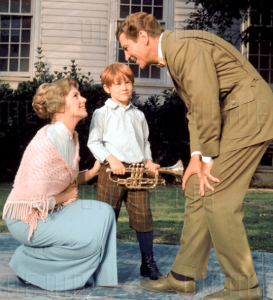 At home, she discusses the incident with her mother; it’s not that she wants to be single all her life, but the right man has not come along. Most stage productions, including ours, include the song My White Knight, which I find rather romantic, for she doesn’t want a true white knight, but rather a more common man, but with shared interests. But the 1962 film switched it to Being in Love. The town is excited when the Wells Fargo Wagon rolls into town, each wishing for something special. It carries the instruments and Winthrop excitedly shows it to Marian, speaking for the first time in years, not worried about all the “s’s.” The look in Marian’s eye changes. In fact, she rips a page out of a book before handing it over to the mayor.

Life continues peacefully for a few days, until one of the salesmen from the beginning train stops back into town and runs into Marian. He has proof to put Hill away, but she distracts him. She has begun to care for Harold and eventually agrees to meet him at the footbridge during the town’s evening social. The young people enjoy the Shipoopi dance. On the bridge, Marian reveals her feelings to Harold, Till There Was You. She knew that Harold was lying shortly after he arrived; Gary, Indiana didn’t have a Conservatory class in 1905, because the town wasn’t built until 1906. Harold’s friend has noticed that the salesman is in town and advises Harold to leave, but Harold doesn’t want to know, because he has fallen for Marian. He attempts to hide at her house while the town searches for him and answers Winthrop’s questions about his lies. He’s caught and brought before the town. Marian defends him; River City has been a better place since Harold’s arrival; the children have been excited for weeks. Tommy brings the kids’ out in uniform and Harold directs as they play (badly) Beethoven’s Minuet in G. The parents are so proud. Then he gets to lead a parade, complete with 76 trombones.

In my production, I remember the ladies come up to Marian at the end; they’ve finally tried her book suggestions and love them.

In 2003, Disney produced a version starring Matthew Broderick (the voice of Simba, the titular Ferris Bueller, and paired up with Nathan Lane for The Producers two years later) as Professor Harold Hill, Kristin Chenoweth (Glinda in Wicked and Lily St. Regis in Disney’s Annie) as Marian Paroo, and Victor Garber (he keeps popping up; Disney’s Roger and Hammerstein’s Cinderella, Disney’s Annie, and Titanic) as Mayor Shinn. While a good rendition, I feel that Matthew Broderick is missing some of the pizzazz that Robert Preston showed in the role.

Up Next: South Pacific