My senior musical, once again in the ensemble, though I had a four-word solo in a big chorus number. My mother made my costume, so I would actually look Scottish and not American colonial (seriously, the costumes came with mop caps). Overall, I was just happy we were doing a musical about Scotland, but part of me was also disappointed I didn’t actually have a part. I already knew this show going in. The film stars Gene Kelly (most famous for An American in Paris and Singin’ in the Rain, but a staple of musicals in the fifties and sixties) as Tommy Albright, a New Yorker, hunting in Scotland with his friend. They get lost and discover the mysterious village of Brigadoon. Gene Kelly was also the choreographer of the film and thus it features a lot of incredible dancing. The musical was written by Lerner and Loewe, just as prolific as Rodgers and Hammerstein.

As the mists clear around Brigadoon at the start of the show, a quiet chorus sings Brigadoon. The show really starts with MacConnachy Square as the town rises for the day, selling their wares. And today is a special day; the wedding of Charlie Dalrymple to Jeanie Campbell. At the Campbell home, the young women are preparing. They talk about Jeanie Packing Up (which was not included in the film) and Jeanie’s older sister, Fiona remarks that she is Waitin’ for My Dearie.

The hunters, Tommy and Jeff, enter the village square truly perplexed not only at people’s dress, but Fiona was the only friendly person. Charlie however is thrilled and invites the strangers to his wedding, for he will Go Home with Bonnie Jean (this is a fun song). Fiona stops by the square for items for the wedding and takes Tommy out to find Heather on the Hill. While she is gone, Charlie stops by the house to sign the family Bible and sings to his intended, Come to Me, Bend to Me (very romantic, and sadly not included in the film). Local flirt, Meg Brockie takes Jeff for a nap, then makes a fuss when he doesn’t want to sleep with her, for she was trying to find The Love of My Life (also cut from the film, apparently too risqué). 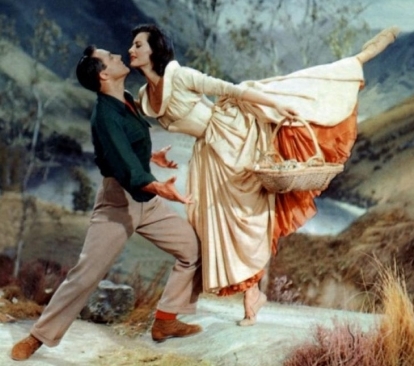 Tommy is quite taken by Fiona and remarks to Jeff when they meet up, It’s Almost Like Being in Love. However, he begins to take note of people mentioning a miracle and a blessing and finds the dates in Fiona’s family Bible. She takes them to the schoolmaster, Mr. Lundie, who tells them about Mr. Forsythe, the minister, praying to God for a miracle to protect the village from witches in the eighteenth century. [Historical note: not sure the person who wrote this musical quite figured out their timelines; the Battle of Culloden (those who watch Outlander will understand the significance) happened in Scotland in April of 1746 and this miracle supposedly happened in May of 1746 and witches were not as prevalent…maybe the English trying to take over their land. Witches might be a more reasonable cause a hundred years prior]. Carrying on, God granted a miracle, that Brigadoon would disappear into the mists and appear once every hundred years; when the villagers go to bed, it’s one year, when they rise the next morning, it’s a hundred years later [don’t think about the math too much or you realize bad things]. If someone from the outside wants to stay, they must love someone enough to leave their old life. But a villager can’t leave, or the whole village will disappear forever.

And this is where Harry Beaton causes a problem. He’s in love with Jeanie Campbell, who is happily marrying Charlie Dalrymple. The clans gather for the wedding, all clad in tartan (though if you want to see true Highland garb, watch Outlander; yes, tartan breeches were a thing, a weird thing, but nonetheless, real. Oh yes, and further historical note: it was after the Battle of Culloden that wearing tartan was outlawed, thanks to the English). And it is true Scottish custom that there need not be a minister present at a wedding, as long as the two being married share mutual consent [this has popped up in Scottish romances; women cannot be married against their will]. There is a dance, including a lovely one by Jeanie. Then a sword dance (real thing, and also cut from the film, boo). Harry participates and runs off after seeing Jeanie happy, shouting he will leave Brigadoon and doom them all. Tommy joins the men in The Chase, hunting Harry Beaton down before he can ruin things. Jeff has wandered off to hunt and thinks he’s shooting at a bird. Harry is the one who falls down dead.

Meg Brockie entertains the wedding guests with the tale of My Mother’s Wedding Day, until the men return with Harry (this is all cut from the film; Fiona and Jeanie’s father tells everyone to keep quiet and not disturb the joyous occasion. Another cut song by Tommy is There But For You Go I). Tommy is ready to stay in Brigadoon, until Jeff tells him what happened. Tommy begins to doubt enough that he won’t stay. But once he returns to New York and his fiancée, he cannot concentrate. Little words will remind him of something and he ignores what is going on. Tommy breaks it off with his fiancée and drags Jeff back to Scotland. He gets a miracle of his own; the town was just starting to disappear and he can enter. As Mr. Lundie remarked, “if you love something enough, anything is possible.”

The music in this show is fun, especially the songs that were cut; upon re-watching of the film, I had never noticed that they weren’t in the film. It features, as many other musicals do, a couple falling in love at first sight; which I always argue is never a good way to start a lasting relationship, or least, not a believable one. Gene Kelly is of course, a remarkable dancer and his partner is skilled as well.

Up Next: Seven Brides for Seven Brothers