Normally, I am the last person to encourage early Christmas movies; I have worked retail for seven years, the holiday falls decidedly after Thanksgiving and Halloween. But, I’m reviewing my favorite musicals and this certainly is one. We watch it every year, usually when we decorate the tree (one week prior to Christmas). I had a friend in college who was in a community production of the show, so it was interesting to see how the stage production differs from the film.

The film stars crooner Bing Crosby (famous for singing Irving Berlin’s White Christmas) as entertainer Bob Wallace, Danny Kaye as funnyman Phillip Davis (he reminds me of Donald O’Connor from Singin’ in the Rain…and Donald was actually cast in the role, until he got sick; and he had taken over from Fred Astaire), professional dancer Vera-Ellen as Judy Haynes, and Rosemary Clooney (aunt to George Clooney as well as a popular singer) as older sister Betty Haynes. As I’ve commented before, Mary Wickes (Sister Act, The Trouble with Angels, and Music Man) appears as Emma Allen, the housekeeper.

It opens on Christmas Eve, 1944, on the German war front. Wallace and Davis are putting on a little Christmas show for the troops and their commander, General Waverly stops by before he takes a new position. Bob finishes White Christmas (this is actually not the first film to feature the song or Bing singing it; first was Holiday Inn, which features songs [by Irving Berlin] and routines for all seasons) and has a slam-bang finish he wants to perform for Waverly. The general stands up and encourages his troops. To get off the stage, Bob starts We’ll Follow the Old Man (love the song). There is an attack and Phil saves Bob’s life, getting hurt in the process. Bob is grateful and Phil talks him into starting a two-man show with him once the war is over. They are incredibly popular and there’s a cute medley of tunes from that era, including Blue Skies and the duo eventually produce a musical.

But Phil would like some time away from work and tries to hook Bob up with a variety of women, but he’s not interested (someone please explain what “mutual, I’m sure,” means, because I’ve never gotten it). Those girls don’t want to settle down. Before they spend their holiday in New York City, they have promised an old pal in the Army that they’d check out his sisters’ act. Betty and Judy Haynes are surprised at the appearance of the famous duo, well, Betty more than Judy, for Judy actually wrote the performers, trying to get an edge in the industry. The men are pleasantly surprised by the Sisters (another favorite of mine) and immediately attracted. Phil arranges them “boy, girl, boy, girl,” at the table to discuss matters, then Judy sweeps him away, for The Best Things, Happen While You’re Dancing. Vera is an excellent dancer. Betty comes clean on the matter to Bob and they disagree a bit, but figure they won’t see each other again, so let it lie. Excepet the girls got into trouble with the last place they were staying, running a rug, and the gentlemen help them out. Phil gives the ladies his tickets for the train and talks Bob into a distraction to buy time. Thus, Bob Wallace and Phil Davis perform Sisters with the feathered fans (they enjoy themselves and turns out, it was Bing and Danny messing around, but the director liked it so much, he worked it into the film). 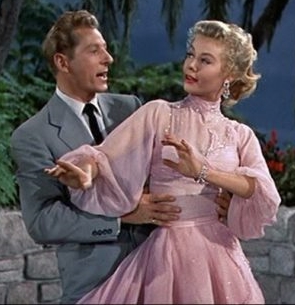 The men catch their train in the nick of time, but Phil doesn’t have the tickets, so they must purchase new ones and sit up all night. They bump into their drawing room, revealing the Haynes sisters. Bob is persuaded to stay on the train for Vermont, instead of getting off at New York. “Must be beautiful this time of year, all that snow.” The quartet extols the virtues of Snow (Vera’s vocals were dubbed). However, when they reach Vermont, it is sunny and the state hasn’t had snow since Thanksgiving (due to my family’s travels and my brother attending college in Vermont, there is sadly no Pine Tree, Vermont). A further surprise, Bob and Phil discover that the Columbia Inn (the set is reused from Holiday Inn), where the Haynes sisters are booked, is owned and operated by General Waverly. The inn is struggling with the unseasonable weather and the boys decide to help by bringing their show up to the inn. They’ll fill in with the Haynes sisters.

Minstrel Show segues into Mandy, all with glittering costumes and showcasing Judy’s dancing. Betty and Bob begin to get along and Judy attempts to set her sister up. Bob and Betty share a cozy time in the main lodge, discussing sandwiches (thrown in by Bing) and Count Your Blessings. Bob discovers that Waverly has been hoping to get back into the Army; he wants a command position, but has to read him the news that it won’t work out. He has another idea while Danny runs Choreography (how does Vera do that with her tap shoes?); he’ll get on the Ed Harrison show and get the men back together for the general. Emma listens in on the other line, but doesn’t hear the whole conversation, so she mistakenly believes that Bob is doing it as a plug for his show, which she tells Betty. Betty is now cool to Bob. Judy and Phil decide to stage an engagement between themselves, hoping Betty will stop mother-henning Judy and thus pursue her own relationship with Bob. At a cast party, Phil announces “I don’t know if the Best Things Happen While You’re Dancing, or if they just happen in Vermont;” he and Judy are engaged. Instead of bringing Bob and Betty together, Betty leaves for a solo act.

After the fast-paced Abraham dance, Judy discovers Betty’s letter and she and Phil tell Bob the truth, so he stops to see Betty on his way to the Ed Harrison show. Love, You Didn’t Do Right By Me expresses Betty’s feelings; she had fallen for someone she thought was a knight on a white horse and was disappointed. Bob doesn’t have time to fully explain the situation and find out why Betty is mad at him. But she sees his spot on the show, What Can You Do with a General? and is pleased. Meanwhile in Vermont, Phil pretends to hurt his leg to keep the general away from the television.

The big night has arrived and there is a huge turnout of soldiers for General Waverly. He is forced to come down in his uniform and is stunned by the sight. The men repeat We’ll Follow the Old Man. Waverly is visibly touched. Bob and Phil start Gee, I Wish I Was Back in the Army and are pleasantly surprised by the appearance of Betty. They finish with White Christmas, topped with the news that is has begun to snow (I love the red gowns in the scene; and note, that girls that young now are not on pointe). Betty and Bob are back together and Judy and Phil are officially together. Just happy ending all around. 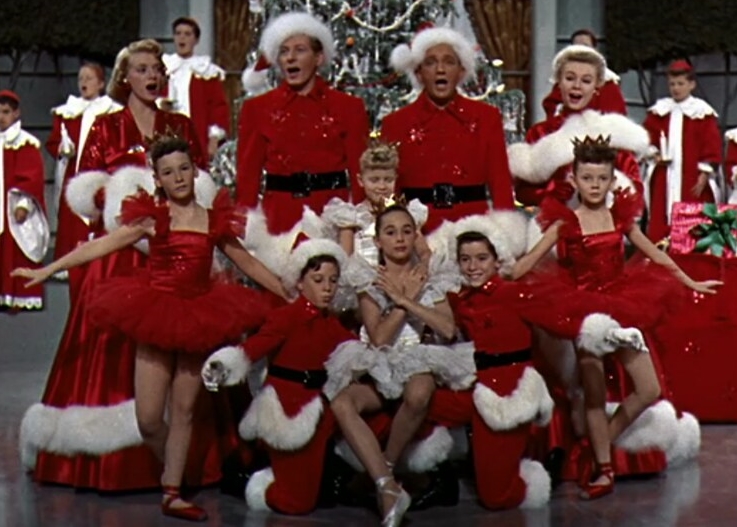 I love basically all the songs in this show.  The Christmas season in my house is not complete without this film.  It’s a favorite of my father’s, and is a family feel-good film.  The characters do not instantly fall in love; there’s a bit of drama (but not too much), miscommunication and when you think everything is falling apart, it comes back together.

Up Next: Fiddler on the Roof