This was the first musical I ever saw on stage; my mother was a chaperone on my brother’s class field trip and I went with them.  Heck, I even remember what I wore that day because I was so excited.  And I distinctly remember listening to this soundtrack from a young age; we had the record [before vinyl came back ‘in’].  We named one of our cats “Tugger” after this show.  I know these recordings so well, that I can pick out the difference in sound between the London Cast and the Broadway Cast, and I am enough of a nerd that I have a preference [Broadway]; and it is another soundtrack that I know almost every word.  The show is based on T.S. Eliot’s poetry book, Old Possum’s Book of Practical Cats; which I have a copy of (somewhere) and did dramatic readings from for speech club in high school.  It is the second-longest running musical in Broadway history, behind only Webber’s other famous musical Phantom of the Opera.  Note; I am basing this off of the 1998 staged production, which stars Elaine Page as Grizabella [she replaced Judi Dench when she was injured to star on the West End], filmed in London; NOT the recent film version.  I have heard too many poor reviews and the bits I have caught do not make me want to watch it.  My mother and I were very excited when it was first announced, but by the time we saw the trailer, we knew it was not what we wanted.  Quick note to those who created the recent movie: we are theatre people, we don’t mind seeing people dressed up like cats; no need for that CGI business.

The prologue are cat eyes falling into the background; and the center of the eyes are dancers posed.  Jellicle Songs for Jellicle Cats explains what Jellicle cats are, such as “are you mean like a minx/ are you lean like a linx?”  There is a beautiful chorale section in the middle, until they break apart again to dance.  But “there’s a man over there/ with a look of surprise…a man who’s not heard/ of a Jellicle cat.”  And they explain the Naming of Cats.  There are three names that a cat has; the “sensible, everyday” name that the family uses, then “a cat needs a name that’s particular/ a name that’s peculiar/ and more dignified,” one that has never belonged to more than one cat.  And finally a secret name that “no human research can discover,” and cats ponder it often “his ineffable, effable, effanineffable/ deep and inscrutable/singular name.”  [I remember having to look up was ‘ineffable’ meant when I was younger: too sacred to be spoken.]  Munkustrap explains that Jellicle cats congregate once a year for the Jellicle ball, when the Jellicle leader will make a choice on which cat ascends to the Heaviside Layer and be reborn. 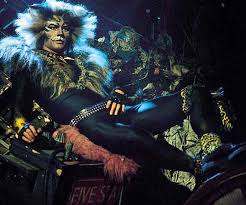 Different cats get their own solo pieces, like Jennyanydots, The Old Gumbie Cat.  She’s known to “sits and sits and sits and sits/ and that’s what makes her a gumbie cat.”  “But, when the day’s hustle and bustle is done/ than the gumbie cat’s work is but hardly begun.”  She teaches mice skills and orders beetles about, and there’s a fun tap dance routine.  Then Rum Tum Tugger bursts onto stage [a favorite].  He’s a “curious cat,” quite contrary.  If you give him one thing, he wants another.  “For he will do as he do do/ and there’s no doing anything a-bow-wow-it,” and struts about like Mick Jagger.  Grizabella, The Glamour Cat skirts by and the rest of the cats shun her, pulling younger cats away.  She’s a fallen cat, a pale shadow to who she once was.  Things cheer up when the cats remark about Bustopher Jones, “who is not skin and bones/ in fact, he’s remarkably fat.”  Police sirens go and the cats worry about Macavity.

Mungojerrie and Rumpleteazer sneak out; a pair of thieves that the family can’t always tell the difference between, “or could you have sworn/ that it might’n be both?”  “And there’s nothing at all/ to be done about that!”  The Jellicle leader, Old Deuteronomy comes out next.  “Well of all things/ can it be really/ yes oh a high a my eyes;” he “lived a long time/ he’s a cat that has lived/ many lives, in succession.”  All the cats, even Rum Tum Tugger respect him and Mr. Mistoffelees very fond of him.  Munkustrap entertains the gathered cats with the tale of the Peakes and Pollicles; actually various dogs that get into a fight, until the Great Rumpus Cat comes out and scares them away.  It’s rather humorous to see “cats” dress up as “dogs.”  The cats hide when they think Macavity is about, but emerge again to joyfully dance at the Jellicle Ball, reiterating that Jellicle cats are black and white, and rather small.  When they’re lazy, they “are reserving our terpsichorean [dancing] powers!’ and “resting and saving/ ourselves to be ripe/ for the Jellicle Moon/ and the Jellicle Ball!”  The dance is wonderfully choreographed.

Grizabella reappears and Old Deuteronomy notices how she is treated and how she tries to remember her old moves.  He remarks on the Moments of Happiness.  Gus, the Theatre Cat is brought out; he’s old and frail and can just remember when he used to be a star.  Some stage productions will include Growltiger’s Last Stand here as one of his old roles; the recording did not.  Skimbleshanks, the Railway Cat pounces in next; he is in charge “of the sleeping car express,” keeping everything in order.  But Macavity strikes again, stealing away Old Deuteronomy.  Two female cats remark on what they know of Macavity, the Napoleon of Crime (typically refers to Professor Moriarty from Sherlock Holmes; note the similarity in names).  Whenever the police get to one of his crime scenes, he’s not there.  It looks like he returns Old Deuteronomy, but it’s really Macavity in disguise and he fights Munkustrap before he escapes, shutting down the lights.  Rum Tum Tugger cheers everyone up with Mr. Mistoffelees, “the original conjuring cat.”  “Oh well, a never was there/ ever a cat so clever as/ magical Mr. Mistoffelees!” (another of my favorite songs)  [It has been noted that his name is similar to Mephistopheles, another name for the devil, but note the different spelling, and Mistoffelees is a sweet cat]  His coat lights up and he brings back the lights on stage; and even Old Deuteronomy.

This is another musical that I would dance around our living room too.  Rum Tum Tugger, Macavity, and Mr. Mistoffelees were my favorite.  As a singer, I’d love to perform Memory (which does not have a corresponding poem; Webber composed it for Sunset Blvd then repurposed it for Cats).