Sherlock Holmes: A Game of Shadows

The sequel to the previous movie (and there is news of a third movie in the works) bringing back Robert Downey Jr, Jude Law, and Rachel McAdams (briefly). Stephen Fry (veteran British TV actor and he pops up in The Hobbit trilogy) joins the cast as Sherlock’s older brother, Mycroft. Jared Harris (Hodge in The Mortal Instruments movie, the father in Pompeii, and King George VI in The Crown) plays the conniving Professor James Moriarty. The soundtrack is once again entertaining.

The film opens with Watson typing, informing us that it is 1891 and the world is on the brink of war. Bombs have been set off in big cities and countries blame each other. Sherlock meets up with Irene once again, attempting to intercept a package. He warns her of men following her, turns out, they’re her escort. Sherlock beats off the four of them and races after Irene. She’s delivering the package during an auction and receives a note in return. Sherlock manages to stop the bomb from taking out its target, but Irene gets away. The victim is ultimately killed and Sherlock is on his next case. Sadly, Irene misses her dinner date, due to having lunch with Moriarty (whom Sherlock refers to as the Napoleon of crime…[I thought that was Macavity…we’ll get to that with the musical Cats down the road]). He chides her for succumbing to her feelings for Holmes and poisons her with a form of tuberculosis. We witness her pass out.

Watson visits Sherlock and discovers his map work of crimes tied to Moriarty, a shadowy game of cat and mouse. But before he can delve too deeply into the madness of Sherlock’s mind, they have plans for the evening, Watson’s stag party. He’s getting married in the morning and Sherlock Holmes is his best man. Sherlock uses it as an opportunity to work more on his case, so Watson goes off to the gambling tables. Congress Reel plays as Sherlock fights off a Cossack from killing a gypsy, whose brother is involved in Moriarty’s scheme. The gypsy, Sims, helps in fact; I always like it when they let a woman fight her own battles. Both Watson and Sherlock are worse for wear when they arrive for Watson’s wedding, but it goes off without a hitch. At the end, Sherlock is called to meet Moriarty. The mathematics professor reveals that Irene Adler is indeed dead, giving Sherlock her bloody handkerchief. And the only reason Moriarty has left Sherlock live so long is professional respect. And Moriarty intends to go after Watson, even though he no longer works with Sherlock.

Which means that Sherlock has to crash the newlyweds’ honeymoon. He gets Mary off the train (don’t worry, Mycroft picks her up) and he and Watson take care of the regiment of soldiers….It’s rather entertaining. Sherlock is in a dress. Then they’re off to Paris, to meet up with Sims. They try to ruin Moriarty’s plans at Don Giovanni, but that was a decoy from the bombing that covers up an assassination. (To the Opera is my favorite track on the soundtrack, because I don’t mind a little opera music in my life.) Watson and Sherlock deduce that Sebastian Moran is working for Moriarty (the middle man we keep seeing); an expert shot and once served with Watson. The mastermind’s plan is ramping up and next stop is Germany, which they have to sneak across the border. A moment of humor; Sherlock dislikes horses: they’re a danger at either end and crafty in the middle. Why would he want something with a mind of its own between his legs? (That could be taken another way…both movies are full of innuendos). 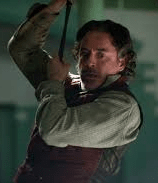 In Germany, Sherlock is captured and interrogated by Moriarty, which involves having a large fish hook stabbed into his shoulder, raised up, and Moriarty spins him about. The Napoleon of crime broadcasts Sherlock’s screams over a loud speaker. Watson faces off against Moran, ultimately using a bigger gun: “Come at once if convenient, if inconvenient, come all the same.” They meet back up with their gypsy friends and make a run for a train involving some excellent use of slow-motion. Once safe, Sherlock stops breathing. Watson thinks to use his wedding gift, a vial of adrenaline. They then meet up with Mycroft at the peace summit in Reichenbach, Switzerland. Morarity’s plan is to create a world war now that he has ties to everything from bullets to bandages. The final push will be an assassination of an ambassador at the peace meeting.

Sherlock leaves Watson and Sims to deduce which ambassador, determining that her brother’s face was changed surgically and he’ll take the fall. The genius moves Moriarty outside to play chess. He reveals he got Moriarty’s little red notebook which tracks all of his fortune and has sent it safely to Mary Watson and Scotland Yard. The two brilliant men are about to face off, each planning out their opponents moves and counter-moves, when Sherlock realizes that with his injury, his demise is inevitable, but he can take Moriarty out with him. Watson and Sims stop the assassination and Watson opens the door just as Sherlock pushes off.

Watson ends with Sherlock’s funeral. Mary checks on his progress and reminds him they need t leave soon for their second attempt at a honeymoon. But there’s a package first. Inside is Mycroft Holmes’ oxygen supply, which Sherlock had been toying with. When Watson runs out of the room, Sherlock reveals himself to have been catalogued as his armchair. Is this truly “The End?”

I enjoyed seeing Sherlock face Moriarty; they were well matched. Sherlock deserves, or requires a brilliant opponent, or else life is dull…and then he causes problems for Watson. The criminal mastermind did have a point; this is very similar to how the first World War began: tensions between nations rising before as assassination kicks it off. Jude Law and Robert Downey Jr. once again play well off of each other, Watson always being right where Sherlock needs him. A good sequel, an equal to the first.

Up Next: BBC’s Sherlock