This movie would have been helpful in high school so I might actually be interested in Shakespeare, but since it’s rated R, that didn’t happen. It also has a cast and a half! A veritable “I’ve that person before.” Geoffrey Rush (Barbossa in Pirates of the Caribbean) owns the Rose theatre, and yes, one of the thugs trying to burn his feet in the beginning was in A Knight’s Tale. Dame Judi Dench (M in several Bond films is only a small part of her long filmography) won the Academy Award for Best Supporting Actress as Queen Elizabeth, although she’s only on camera for less than ten minutes. (Ironically, she went against Cate Blanchett that year in the same category; Cate was nominated for playing Elizabeth I in Elizabeth, which also featured Joseph Fiennes [his brother is Ralph, also known as Voldemort amongst other credits] as her lover Robert Dudley. Here, he is the titular William Shakespeare). The film as a whole won Best Picture, beating out Saving Private Ryan. Future Harry Potter faces are Mark Williams (Arthur Weasley) as the stutterer and Imelda Staunton (Dolores Umbridge) is Viola’s nurse; her real-life husband Jim Carter (Carson the butler in Downton Abbey) is the actor who plays the nurse. Gwyneth Paltrow (before she was Iron Man’s Pepper Potts) is Viola, and Colin Firth (far more romantic in Pride and Prejudice) is Lord Wessex. Ben Affleck is even in the movie, as an actor who plays Mercutio. Whew, you need a map to make sense of all this!

At the film’s opening, Shakespeare is suffering from writer’s block and searching for his muse. He is being asked to deliver his newest play, but honestly has not written anything. He claims it is all locked away; well, it’s so well-locked, it hasn’t even occurred to him. He happens to peek in on a performance of one of his plays for Queen Elizabeth. In the audience is a woman who loves his work. The woman later explains to her nurse “I will have poetry in my life. And adventure. And love. Love above all.” [Lots of women want that. I want that. Still searching.] The young woman goes so far as to wish to be in plays; not something that was done at that time, women’s roles were played by prepubescent men.

Shakespeare is finally forced to start his latest production (with a little nudging from contemporary, Christopher Marlowe). At the end of auditions “Thomas Kent” takes the stage and speaks with such passion that Shakespeare is impressed. Thomas runs and Shakespeare gives chase, all the way to a manor home. We discover that Viola is pretending to be Thomas Kent in order to perform. A wrench is thrown in the works when pompous Lord Wessex takes interest in Viola, well, more her money than anything else. He arranges it with her parents and spots Shakespeare at a dance held at the home making eyes with his new intended. Shakespeare gives him Marlowe’s name. But Shakespeare hangs around to speak to Viola at her balcony. (By now we can see where some of this is going; it centers around the creation of Romeo and Juliet.) Shakespeare has found his muse in Viola and begins writing feverishly.

Even more good news, the lead company of actors have returned, including the typical lead Ned (played by Ben Affleck) and the usual “woman.” “Thomas Kent” is given the role of Romeo; Ned is told his part of Mercutio is actually the lead. But Ned tends to be supportive of Shakespeare, though he’s aggravated by some of “Thomas’s” ineptitude. Away from the stage, Shakespeare speaks to Thomas to find out information on Viola, which leads to a rather awkward kiss between the two “men;” there are some scholars who theorize that Shakespeare was gay, or possibly bisexual. Luckily for Shakespeare, when he follows “Thomas,” he discovers that “he” is Viola. Who has just discovered from Lord Wessex that they are to be married in two weeks. Viola takes Shakespeare to her bed (the nurse has to sit in a chair in front of her door and stave off other servants) and discovers that there is something better than a play. Now when they are both at the theatre, the couple makes out backstage.

In order for Viola to marry Wessex, she must appear before Queen Elizabeth. The queen recognizes the young woman from attending plays put on for the queen, but cautions Viola that poets cannot write true love. A wager is called out, can a poet portray true love? As Wessex and Viola leaves, Elizabeth tells Wessex that she can tell that Viola has been “plucked,” since last she saw her. Wessex suspects “Marlowe.”

A fight breaks out between the two theatres and acting companies; Shakespeare told one man he could have the play, but has given it to this man, etc, etc. Shakespeare and his troupe triumph and celebrate at a pub. During the festivities, Viola finds out that Shakespeare is married (he was, though he was living away from his wife and they were not on best of terms). She leaves and Shakespeare goes to follow, but discovers that Marlowe had just been killed. He blames himself, figuring that Wessex had killed Marlowe, thinking it was Shakespeare. Wessex meets Viola the next morning to give her the good news that her poet is dead. She is despondent at church, until Wessex spies Shakespeare, who had spent the night pleading to God for his crime. Wessex runs out of church, alarmed. Viola is happy and she and Shakespeare speak. While they love each other, they cannot be together. Shakespeare is married and Viola is engaged to be married; she must marry someone and if she cannot have Shakespeare, why not Wessex? Even though they will move to his plantation in Virginia.

Now a bit heartbroken, Shakespeare finishes Romeo and Juliet, even having a full copy written and given to Viola. Unfortunately, a boy happens to see Shakespeare and Viola making out and reports it (remember, ladies were not allowed on stage). The production is put to a halt by the Master of Revels when Thomas is outed as Viola. This is after Wessex attacks Shakespeare. They duel and Shakespeare calls Wessex out for murdering Marlowe. In that case, it had been a tavern brawl and Marlowe accidently got his own knife in the eye. Wessex had been pleased with the news, again thinking it was Shakespeare. The competing theatre offers its stage as a way for them all to thumb their nose at the Master of Revels.

Romeo and Juliet premieres the same day as Wessex’s and Viola’s wedding. Viola sees the ad and leaves the carriage before Wessex enters. Ironically, the young man who is to play Juliet had his voice break that day. They now lack one of the stars of the play. And the first performer to go on stage has a stutter. He overcomes it and delivers a commanding introduction. The two theatre owners are discussing their dilemma where Viola overhears. She whispers she is Thomas Kent and knows every word of Juliet’s part. She is rushed backstage and comes out right on cue. Shakespeare is most surprised, but pleased; and most fortune for he is playing Romeo in “Thomas Kent’s” place. 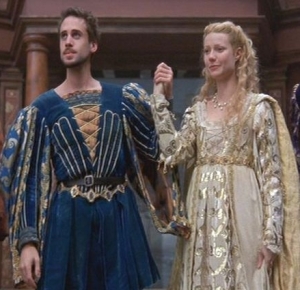 It is a wonderful performance. The whole audience is in tears by the end. The standing ovation at the end is interrupted by the Master of Revels, again stating that Juliet is a woman. (Most everyone can see that). “Have a care with my name, you’ll wear it out,” Queen Elizabeth states from the audience. She takes in Juliet and judges the mistake an honest one. “I know something of a woman in a man’s profession. Yes, by God, I do know about that.” She calls out Wessex on the wager; Romeo and Juliet accurately depicted true love. As Queen, none can contest her word. She tells Viola quietly to say her farewells, she is still bound in matrimony to Wessex and must accompany him. And she wants a new play, for Twelfth Night, from Shakespeare. Something happier. It is a sad parting between Shakespeare and Viola, but she remains his muse for his next play, involving a shipwreck and a woman masquerading as a man.

The costumes are stunning in this film and well casted. Dame Judi Dench commands the scene when she speaks as Elizabeth. This shows a greater range for Gwyneth Paltrow than as Pepper; she shows such passion as Viola. Joseph is an artistic Shakespeare without being overbearing. They share great chemistry together. Not the best role for Colin Firth. Overall, it’s a nice romp for Valentine’s Day.

I have often mentioned that for an English major, I do not like Shakespeare; not written anyways. I enjoy his plays much better when performed, as they were intended. As many high schoolers, I read Romeo and Juliet in English class and found it dull and analyzed to death. Even MacBeth was slow. I think because everyone is trying to find some hidden meaning in Shakespeare’s words. Plays do not read the same way novels do. I also struggle with writing screenplays; it was one English course that I did not excel in in college. I am better suited for writing research papers or novels. Now, BBC’s Hollow Crown movie productions of some of Shakespeare’s plays are phenomenal. Tom Hiddleston is an excellent Henry V. I still need to watch the production with Benedict Cumberbatch.

Do any of you have a favorite Shakespeare play?

Up Next: Little Women