I know I said Master and Commander was next after the end of Sherlock, but sadly, I cannot find my copy. So I moved on to what turns out to be the last of what I’m calling the “historical” movies. Hidalgo stars Viggo Mortensen, fresh from his big role as Aragorn in Lord of the Rings. Which is why I watched the movie, to be honest. Viggo impressed me in Middle Earth and this story had the added bonus of being about a horse. As many other girls, I went through a phase where I was really into horses. I read book series about riders; I wanted to ride a horse, and in the wake of Lord of the Rings, bonus features showed that Viggo had a connection to his horse on set…we can see what got me to go to the theatre. Which is probably what marketing people were banking on.

The film, which claims to be based [loosely] on the life of Frank T. Hopkins, opens in late December of 1890. Frank and his mustang horse, Hidalgo, have just won another long distance race. But Frank also works as a dispatch rider for the American military. He is sent with orders to Wounded Knee Creek…we can already tell where this might end. Frank seems sympathetic to the Natives, but rides before the first shot is fired. Hidalgo hears the commotion and turns back. Short time jump to eight months later, during one of Buffalo Bill’s Wild West shows, and Frank is drunk during a reenactment of the event, skewed towards making the American military look good and portraying the Natives as wild and bloodthirsty.

Buffalo Bill and Frank have a visitor, from the Middle East. Their land is famed for its pure horse breeding practices and hold the title for greatest endurance horse racer, which Bill has bestowed upon Hopkins and Hidalgo. If Hopkins will not allow the title to be removed, they challenge him to a 3,000 mile race in the Arabian desert, referred to as the “Ocean of Fire.” Hopkins is prodded into accepting and embarks on a ship to get there. He meets a Major Davenport and is (much younger) wife, Lady Anne, who has a thoroughbred mare entered in the race.

Once at the race, Hopkins meets the Sheikh, who sadly only has a daughter left, Jazira, who is intended to marry the prince that is riding the prized Al-Hattal if he wins. The Sheikh also has an interest in the Wild West. They almost strike up a friendship, but it is also clear that no one expects Hopkins and Hidalgo to survive the race, much less win. Several people offer him chances to drop out, but Frank is a bit stubborn. Against a competitor paying to deprive him and his horse of water and a sandstorm, Frank and Hidalgo make it to the half way point. The Sheikh’s nephew (cough-evil-cough) pops in and lo and behold, a raid happens later that evening; an attempt to steal Al-Hattal, though they do get away with the breeding book and the daughter. The Sheikh asks Hopkins to get Jazira back (and he’ll forget the little incident of Jazira visiting his tent [she’s fascinated by the foreigner and wishes to help so she doesn’t have to marry the prince]). A bit of a shoot-out later, and Hopkins returns with Jazira. 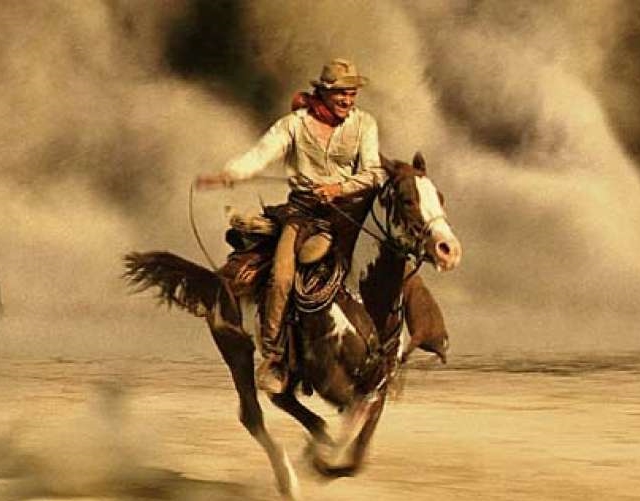 The race continues (and Lady Anne and the nephew are in league with each other; she wants her mare to win so she has breeding rights to Al-Hattal; they intend to kill Hidalgo). One of the other competitor’s falls into a pit…quicksand or tar, not entirely sure. Race rules dictate that no one helps him, but Frank ignores that command. Which helps later when Hidalgo and Frank fall into a spear pit. You may want to look away when Hidalgo gets hurt and Frank has to get him out. Frank’s new friend comes back to help, but sadly is killed moments later. Frank gets some satisfaction for putting the evil nephew in another spear pit, his parting words, “nobody hurts my horse.”

Then Frank almost gives up. Hidalgo is badly hurt. They are far from anything familiar; they’re in a hostile land where people want to kill them. Then he hears a Native chant. He remembers his past, his mother (a Sioux woman; his father had been a cavalry man who had fallen in love with her). Frank joins the chant and gains strength from another people who held the horse sacred, just like the Bedouin. The last two competitors pass him. Frank gets back on Hidalgo, who has stood up from collapsing and it’s a race to the finish. At first, Lady Anne’s horse is in the lead, followed by Al-Hattal, then Hidalgo. Then Al-Hattal takes the lead. Hidalgo passes Lady Anne’s horse and makes a move on Al-Hattal. Our heroes win the race!

Frank returns to America just as the American military is rounding up all the Native’s mustangs, with the intention of shooting them. The Native chief from earlier in the movie who had motivated Frank has sadly passed, but had mentioned the plight to Frank and Buffalo Bill. Frank has one more dispatch; the price for the mustangs has been paid in full [the large prize money]. The mustangs are set free, and Frank lets Hidalgo go. The film finishes by stating that Frank Hopkins was “an outspoken activist for the wild mustang until his death in 1951 at 86 years old.”

I still enjoy the movie. It is very roughly based on some true events, but it is ultimately a story that we want to have happened. We love when an underdog triumphs; we want Hidalgo to beat all those pure bred horses and prove everyone wrong. Viggo was amazing. He learned Elvish for Lord of the Rings and he has a similar quality when speaking the Sioux language.

Next Time: Time to start some romantic movies. First, a few with a more historical base, starting with Shakespeare in Love.