A not-as-popular re-telling of the Three Musketeers story; it focuses primarily on D’Artagnan’s story, even more so than traditional versions. The iconic three musketeers are barely side characters in this tale. It has a decent plot, but it also heavily relies on action and fight scenes. I don’t know most of the actors, though Tim Roth (Emil Blonsky from 2008’s The Incredible Hulk) is the villainous Febre, or “Man in Black.” Rochefort is an entire other character, and very minor [to the point that I didn’t know that was him until reading the credits]. Porthos’s Steve Speirs has had bit parts in other movies I’ve seen.

The movie, like a lot of the ones based on a legend, has an introductory card giving the back story; the English and Spanish are threatening France with war and King Louis XIII is a weak man, easily manipulated by Cardinal Richelieu. The Musketeers oppose the Cardinal. Next, we’re at a country home, a young boy sparring with his father; ’tis young D’Artagnan. A man in black rides in to demand taxes for the church, D’Artagnan’s father has nothing left to give. When D’Artagnan tries to stand up for his father, Febre kicks him. The father goes for his sword, but he’s cut down, as is his wife. D’Artagnan takes up his father’s sword and catches the man across his eye. Near dusk, an older man picks up D’Artagnan, Planchet. He will teach the boy.

Fourteen years later, Planchet and D’Artagnan stop at a tavern. They run into Rochefort (looking far fancier than I have ever seen Rochefort) and trouble. D’Artagnan shows off his skills fighting several guards at the same time; a vastly different fighting style than traditional swashbuckling films – a lot of martial arts mixed in. He and Planchet continue to Paris while Febre stops the Spanish envoy and slaughters them, leaving behind a Musketeer tunic. At the headquarters in Paris, D’Artagnan discovers from Porthos and Aramis that the Musketeers have been suspended, per the Cardinal’s orders and Treville is detained in one of his prisons. Meanwhile, Febre mocks confessing to the Cardinal, who is displeased he continues killing people. He wants political tension, not war. Buckingham is arriving soon and the Cardinal cannot have the king make peace with England. Without killing anyone, Febre is to make the king a fool in front of Buckingham. But, if needs must, Febre may kill.

D’Artagnan finds Bonacieux’s inn and is immediately attracted to the repulsive man’s beautiful niece, Francesca (a change from Constance, who is Bonacieux’s wife in the original text). But the young man also has a mission; he intends to rescue Treville from jail. He runs into Aramis and Porthos on the way and once he’s blown the doors, they do assist in fighting the guards. They all go into hiding together, though the young men go to a local tavern and Porthos introduces D’Artagnan to the rest of the suspended Musketeers. Athos is there (again, the original three are demoted to supporting characters and Athos is barely that).

Back at the inn, D’Artgnan hears creaking in the rafters; Bonacieux is peeping at Francesca bathing. D’Artagnan chases him away, but crashed through the ceiling into the bathing room. He and Francesca have a few tender moments together, Francesca explaining that her mother came with the queen from Spain [does that make Bonacieux her father’s brother? Bonacieux is a very French name; it would not make sense for him to be the brother of Francesca’s mother – though it does explain why she is named Francesca] as her seamstress. When she died, the queen has made an effort to help Francesca when she can.

That evening, at the banquet, the musketeers sneak into the palace as cooks and waiters. The banquet is then attacked by a mob of peasants, it seems. The musketeers sneak the king, queen, and Buckingham out, though not without several duels with very capable 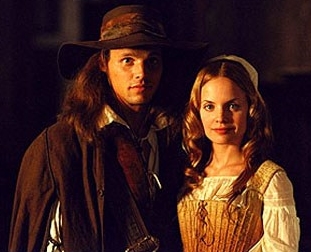 opponents. Guards, disguised as rabble. When D’Artagnan returns to the inn, Francesca stops him and warns him that Rochefort and six of the Cardinal’s guards are in his room. They share a kiss for a moment, and then D’Artagnan gets away from the guards. In D’Artagnan’s room, Bonacieux confronts his niece, warning that they shouldn’t get on the wrong side of the Cardinal. He also wants their relationship to be better, in a disgusting way. She pulls a knife on him and threatens him. He scampers away and she takes a few moments in D’Artagnan’s room, finding an old Musketeer tunic.

D’Artagnan meets the Cardinal, who is very keen on finding out who D’Artagnan is, why he is in Paris and essentially, whose side the boy is on. He makes a pitch to persuade D’Artagnan to his side, but the lad is loyal to the ideals of the Muskteers. Febre emerges from the shadows after D’Artagnan has left. The Cardinal puts the next phase of his plan into action and has the Musketeers arrested (trumped up charges, of course). Treville declares he will no longer hide. Meanwhile, the Cardinal poisons Louis against his queen, having her dismissed from their discussion about Buckingham. So, Francesca asks D’Artagnan for help escorting the queen, in secret. When Athos, Porthos, and Aramis come to D’Artagnan for help freeing the other musketeers, he has to decline.

The small group encounters mercenaries on their ride (some more fight scenes, including D’Artagnan pulling an Indiana Jones stunt, making his way down the underneath of the carriage), but they make it to the home of an old friend of the queen. While Planchet waits for a blacksmith, D’Artagnan takes Francesca on a picnic. He explains that the old Musketeer tunic in his room was his father’s; when he was first taken in by Planchet, all he wanted was revenge, but the old man warned him that a Musketeer stood for higher goals. He gifts Francesca a tiny necklace and they exchange a few more kisses. After, D’Artagnan goes swimming and is in the water when Febre and his men appear. They take Francesca and shoot D’Artagnan after demanding where the queen is. D’Artagnan makes it to shore a little later and has to deal with the two men Febre left. But when he gets back to the house, the queen and Francesca are gone. A little girl holds the information; Febre had threatened to slit her throat to persuade the queen to write a letter to Buckingham. The man in black is holding everyone at Duchamp castle with an army.

D’Artagnan must wrangle together an army of his own. But the Musketeers are not keen to hear him, not after Treville died at the hand of Febre. Febre had come to Treville in his chambers and questioned him about D’Artagnan, both coming to the conclusion that it was Febre who had murdered D’Artagnan’s parents and it was D’Artagnan who had blinded Febre’s one eye. Then Febre burned the building. Febre had then gone to the Cardinal to inform him of the new plan, to kill the queen and Buckingham and thus igniting France and England into war. Louis would be disgraced and Richelieu could take the throne. Febre is mad. It’s said three times; it must be true [he’s more psychopathic, in my opinion]. Rochefort goes after Febre and is quickly killed for his trouble. The Cardinal meets with D’Artagnan in an alley and asks for the lad’s help in putting down his out-of-control monster. D’Artagnan agrees, but not for the Cardinal. When D’Artagnan confronts the Musketeers, they retort that his alliances are skewed, defending the queen rather than the king Disappointed, D’Artagnan leaves his Musketeer tunic, intent on rescuing everyone himself.

He is pleasantly surprised when the whole Musketeer corps comes to his aid outside of Duchamp. he wears his father’s tunic and they ride into battle. Planchet has a cannon hidden in his carriage, which helps break down the door. Now it’s Febre’s men versus the Musketeers. The queen and Francesca drop a bust out their window to show D’Artagnan where they are being held. He climbs up the tower, encountering four guards along with way. When he makes it into the room, Febre is ready to shoot the queen. Francesca steps in front of her, getting hit. But she tells a worried D’Artagnan, “I’m not dead, now will you please go kill him (most awesome line of the movie).” It’s a fierce duel between Febre and D’Artagnan, ending on ladders in a wine barn [not entirely sure what that building is]. As Febre is sliding down a ladder, D’Artagnan stabs him underneath.

D’Artagnan alongside Athos, Aramis, and Porthos are awarded medals by King Louis. France owes them a great debt and Buckingham owes them his life. As the Cardinal blesses D’Artagnan, the young man whispers he will come for the Cardinal, for his actions. Outside, Planchet’s carriage is decorated in flowers and Francesca has a beautiful new gown. When D’Artagnan goes to help her into the carriage, she mutters, “I’m not made of lace,” tripping her husband (I presume they are married now).

After falling in love with BBC’s series The Musketeers, this is a bit of a letdown (never fear, we will be getting to that series). I used to like it for its different fighting, but sometimes now it just makes the movie drag; like, how many crazy stunts can we make the actors do before we get a conclusion. The ending feels rushed. I hate how the original three Musketeers are harshly demoted. I understand this focuses on D’Artagnan, but so does the original and if you’re going to mention some of these other characters, at least do it properly. Why did another bad guy need created? I seriously thought Febre was Rochefort this entire time until I read the cast list. Francesca is a bit of an action girl, which is a redeeming feature for the film and she plays well opposite D’Artagnan. But he seems determined that he is the one to save everyone; he’s the main character to do any serious fighting.

Overall, a bit of a disappointment. I feel that they tried to do too different of a take and lost that swashbuckling quality that we love as a Musketeer film.

Next Time: The Man in the Iron Mask