Some familiar faces are featured in this slightly modernized version of Dumas’ tale. Logan Lerman (Percy Jackson) stars as D’Artagnan at the age he was originally written, Matthew Macfadyen (we just covered him in Russell Crowe’s Robin Hood) is Athos, Luke Evans (he’ll go on to be Bard in the Hobbit trilogy) is Aramis, Mads Mikkelsen (we’ll see him in King Arthur [and we’ll see Ray Stevenson, who plays Porthos in that movie as well], he was the bad guy in Casino Royale and Doctor Strange, and was the father in Rogue One) is Rochefort, James Corden is Plantchet, and Orlando Bloom is Buckingham. Matthew Macfadyen voices the opening narration overlaid little figures depicting that at the dawn of the seventeenth century, after the assassination of his father, young Louis XIII took the throne, surrounded by enemies, most particularly Cardinal Richelieu. The Cardinal plotted to seize power; all of Europe was a powder keg, ready to explode into a war that would engulf the whole continent. Only a few men could prevent the coming apocalypse: the Three Musketeers.

The film actually opens in Venice, highlighting the skills of each Musketeer. Athos is a ninja in the water, aided by Milady. Aramis is standing on a roof a la Assassin’s Creed [all I know are the video game trailers] and flies down on his prey. Porthos is the big bruiser, the bait to catch their opponent. They retrieve three keys to open Leonardo da Vinci’s fault, on a mission to find plans. Being da Vinci, there is a further booby trap; Milady takes it out by sliding and bending backwards underneath the ammunition (um, how do you do that in a corset?) When the guards arrive, they break out of the vault by blowing a hole in one of the canals, flooding everything. The four cheer their victory, but are interrupted when Buckingham enters, Milady having poisoned their cups. She claims that it’s nothing personal, just good business (where have we heard that before?) Buckingham had a better offer. He looks at the plans; they’re for a war machine, a flying ship.

One year later, father and son are sparing. The father has one thing left to teach his son; his adversary may not always be as noble as D’Artagnan. He and his wife wish their son well and send him off to Paris. On the way, D’Artagnan encounters a man in red with an eye patch who will not apologize after insulting D’Artagnan’s horse. D’Artagnan challenges the man to a duel, but when he turns around, sword drawn, Rochefort shoots him – proving his father’s point. His shot grazes the young man’s arm, but Rochefort is intent on finishing the job, until a carriage stops. Milady comments that the young man is too pretty to kill. They leave him; they have business in Paris.

D’Artagnan makes his way to Paris as well. He spots Rochefort in the crowd and chases after him, running into Athos. They set a duel. He runs into Porthos next, and another duel. He misses Rochefort and finds Aramis next to his horse, issuing a citation. Young D’Artagnan argues with Aramis and sets another duel. At the palace, Milady visits the Cardinal. She informs him that Buckingham has built the war machine and is coming to visit Paris. Louis stops in and asks what Buckingham is wearing, so he’ll be fashionable. 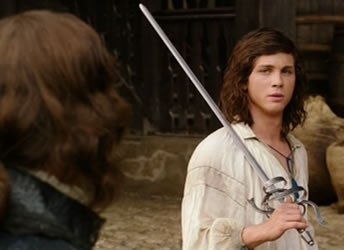 D’Artagnan is waiting for his opponents and when they introduce themselves, realizes that they are the famous three Musketeers. He’s still willing to fight them, but the Cardinal’s guards show up. They outnumber the Musketeers, but when D’Artagnan spots Rochefort, he steps into the fight. He handles himself well, but the other three decide to join, due to the number of opponents. The crowd cheers. In the midst of the spectacular fight, D’Artagnan stops to flirt with a pretty girl. She inquires whether he is always this cocky. Only on Tuesday, he responds, or whenever there are beautiful women. He and the Musketeers are victorious; the three older men have forgotten what it feels like. Constance cautions D’Artagnan that people are not as simple in Paris, then leaves. D’Artagnan informs the Musketeers that Rochefort had tried to kill him, that’s why he was fighting. Any enemy of Rochefort is a friend of the Musketeers. They call the young man reckless, arrogant, and impetuous. He shall stay with them.

At the Musketeers’ home, D’Artagnan meets Plantchet, their servant. He is also a little disappointed to discover that his idols are not as heroic as he imagined. They’re obsolete. They’re warriors with no war to fight. Athos doesn’t believe in much anymore (the result of Milady’s betrayal). They need a great cause to fight for again. They are summoned to the palace to be reprimanded for their actions. Louis is actually quite impressed by their fight; even Anne compliments them for dueling for against forty, as she was told by Constance. She asks her husband to not be too harsh with the Musketeers, after all, boys will be boys. Louis rewards them for their courage, a purse of gold and new clothes. When the Cardinal asks for harsher punishment, Anne speaks up for Louis; the Musketeers are his guard. Louis does ask them to stop fighting, or there will be none of the Cardinal’s guards left.

Richelieu plots with Milady to create a scandal. They’ll plant love letters from Buckingham in Queen Anne’s drawers and steal her prized diamond necklace and plant with Buckingham. Buckingham will be humiliated, King Louis will be outraged, the queen will be executed and war will be declared between England and France. In France’s time of need, the Cardinal will assume the throne.

Buckingham arrives in Paris in his airship, insults the king, implies that he intimately knows the queen, and insults the Musketeers. He speaks to Cardinal regarding peace between England and France while Milady breaks into the queen’s chambers (in a action sequence that is more modern than historically likely) to plant the letters and steal the diamonds (which are guarded by a maze of wires, of course revealed using powder. Again…how do you do that twirl in a corset?) Outside, D’Artagnan speaks to Constance; she keeps turning him down. Louis asks for advice from the young man; the young king is unsure how to speak to his beautiful wife. D’Artagnan counsels the monarch to speak from his heart and show that he cares. Once her mission is complete, Milady reports to Richelieu; she is to accompany Buckingham back to the Tower of London with the diamonds. But she wants an insurance policy, both parties know the other can turn on them. The Cardinal writes a letter, giving his permission for whatever actions are necessary.

One of Anne’s ladies finds the letters and takes them to the king. The Cardinal counsels the monarch to throw a party and ask Anne to wear the diamonds to test whether the letters are real or not. Constance discovers the diamonds missing; the queen goes to the Cardinal (who is in the midst of fencing, skilled where other Cardinals are not), who lies, they both know, but she wanted to see it. Constance goes to D’Artagnan. When he needs a little further convincing to agree to the insane circumstances, she kisses him. He asks who is with him; the three agree. Rochefort calls for them outside, intent to burn the house down. They ride out.

The guards are waiting at the port of Calais. Constance volunteers to be the distraction; she can help here. On the ride to England, the four plot how they will enter the Tower of London. Milady knows they’re on their way; she surmises what the Musketeers will do to Buckingham. The Musketeers know that she knows, so they must do the unexpected. D’Artagnan is their wildcard. He gets caught, but his task is to stall Buckingham. Athos, Porthos, and Aramis arrive with Buckingham’s war balloon and blows the wall apart. D’Artagnan leaps to join his friends. They pick up Milady on the way, thanks to Plantchat. She has the diamonds; she would not trust them anywhere else. Athos forces her to hand over the diamonds and is ready to shoot her. She drops off the ship.

But their adventure isn’t over yet. The Cardinal had commissioned another war machine built, much larger than Buckingham’s. This one is captained by Rochefort, and he has Constance as his prisoner. Athos urges D’Artagnan to save the girl; at the end of the day, duty to country will not keep you warm at night. France will take care of itself. They’ll do an exchange, the diamonds for Constance. But Rochefort takes D’Artagnan prisoner. The Musketeers fire on the other airship, which gives D’Artagnan the opportunity to take the diamonds. He doesn’t get far. Another explosion knocks him out, allowing Rochefort to take the diamonds again. The Cardinal’s ship lands on Notre Dame and when it seems to be rising again, the Musketeers crash their ship into it. D’Artagnan gets up and chases after Rochefort. They duel intensely on Notre Dame, Rochefort landing several strikes on D’Artagnan, but when Rochefort was getting cocky, D’Artagnan catches his sword and stabs the villain. The diamonds are back in his possession.

They limp the airship back to the palace, crashing into the gardens. The Cardinal is ready to arrest them, but Louis comes out. They spin the tale of Rochefort being a traitor and give credit to the Cardinal, so he can’t speak out against them without revealing his intentions. Anne emerges, wearing the diamonds and all is right in Louis’s world. He intends to make more changes and thanks D’Artagnan for his help. Richelieu tries to recruit the Musketeers, but they’re happy with their jobs. D’Artagnan and Constance kiss and he salutes with the Musketeers.

The film closes on Milady on Buckingham’s ship; they had fished her out of the channel. He has an entire armada behind him and a fleet of airships, bound for France to retrieve what is his. And vengeance on Athos.

It’s a slightly modern take on the classic tale. The fights are wonderful, as to be expected with a Musketeer film. As pointed out, several aspects are unlikely for that time period (like that whole sequence in the beginning and in da Vinci’s vault). D’Artagnan is filled with youthful impetuosity, true to character. Anne and Louis are a happier couple, and younger. Orlando seemed to enjoy playing the bad guy. Mikkelson was devious as he tends to be. I did enjoy his duel with D’Artagnan.

The Musketeer tale holds a special place in my heart; it was the storyline of my local faire the year I was on cast. I was a humble peasant (well, wise woman…translation, witch). Our D’Artagnan was excellent and will probably always be my favorite. Energetic and youthful and he threw himself completely into the action. Watching the duels reminded me of some of the matches at the chess game; like grabbing a sword. Kids, not recommended. (In our case, it was the Duke of Buckingham who did the stunt). 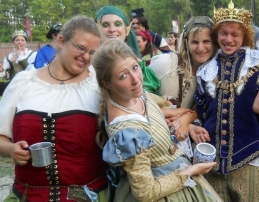 Cast partying at the end of a long day, including the queen in the background, me, Milady de Winter, and King Louis 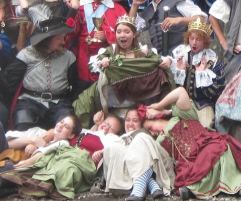 I do like this version; high energy and full of adventure, like a swashbuckling movie should be.

If you have any questions about faire, let me know!  It’s full of wonderful people and I have lots of good memories!

Up Next: We start BBC’s The Musketeers series