This tale quite possibly influences elements of Arthurian legend, such as a love triangle. (Well, it’s French). The movie came out while I was in high school and my interest in Arthurian legend and Irish legends were already growing, though the marketing touted it as “before Romeo and Juliet.” Lots of recognizable faces. James Franco is the titular Tristan and Sophia Myles (she would later be Renette aka Madame de Pompador in Doctor Who) is Isolde. They’re joined by Rufus Sewell (Count Adhemar in A Knight’s Tale) as Marke, Mark Strong (Godfrey in Robin Hood and Lord Blackwood in Sherlock Holmes) as Wictred, Henry Cavill (Charles Brandon in The Tudors series and Clark Kent/Superman in the latest DC movies) as Mellot, and Thomas Brodie-Sangster (if his name isn’t familiar, his face is; he’s in Game of Thrones, The Maze Runner, and Nanny McPhee) as the young Tristan.

The scene is set, telling us that Britain in the Dark Ages after the Roman Empire left is divided amongst its tribes, leaving it vulnerable to Irish incursion. The Irish king fears Britain uniting. The scenery is gorgeous as the film opens, showing a young Tristan and his father, preparing for a tribe meeting. They are betrayed and both of Tristan’s parents are killed. He’s saved by Marke, who loses a hand. On the other side of the sea, young Isolde buries her mother and already doesn’t trust her father.

Nine years later, both are young adults. Tristan faithfully serves Marke and they are hoping to work out a treaty once again with the other tribes. He is friend with Marke’s nephew, Mellot and they have discovered a secret tunnel that comes up in the castle’s keep. In Ireland, the Irish king Donnchadh agrees to give his daughter, Isolde to the warrior Morholt in reward for his loyalty; she will be his bride once he returns from Britain. Morholt leads Irish soldiers in collecting tribute. Tristan confronts Marke; they must do something to rescue the young people that were taken as slaves. Marke agrees, but they must be smart and act together. Tristan leads a group in their rescue, but he receives a cut when fighting Morholt. He kills the Irish leader, but passes out a few minutes later; the blade was poisoned (we already know what befalls the victims from Morholt showing it to Isolde. She counters that there is an antidote.) Mellot lays his friend to rest in a boat, set to sea then lit with flaming arrows.

The boat comes ashore near Isolde as she prepares to run away from her father and Morholt. Isolde chooses to save the young man. The young couple eventually falls in 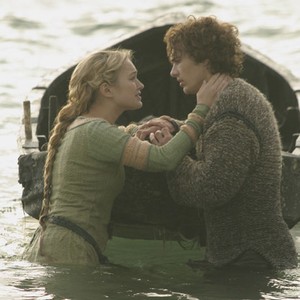 love…Until Tristan’s boat is found and Donnchadh begins searching for the slayer of Morhot (his sword had been found with the boat); Tristan must flee, but Isolde cannot follow. Tristan returns to Marke’s warm welcome and informed that Donnchadh has been scheming. He has set a tournament, with his daughter’s hand in marriage as the prize, along with a healthy dowry; it is an effort to divide the tribes. Marke hopes that if he wins, he will hold the support of the other tribes. Tristan volunteers to fight for him. (Isolde had told him her name was Bragnae to keep her identity secret; he does not know she is the king’s daughter).

Tristan ultimately wins the tournament (after a vicious fight with Wictred, the main opponent to Marke’s treaty) and Isolde gladly says she will be his, but is disappointed to learn Tristan won her for Marke. Marke is a kind husband, but Isolde is still in love with Tristan. At first, Tristan insists that they cannot have anything to do with each other and avoids his adoptive father and new bride. But Isolde pleads and he eventually agrees to secret meetings. Marke manages to get the other barons to sign his treaty and he will be crowned king. He names Tristan his second, passing over his nephew, Mellot. Which does not endear Mellot to Tristan, who has also been favored as a leader. Wictred, who has begun to notice the attention Tristan pays Isolde, suggests to Donnchadh that the coronation would be a good time to attack. Marke even begins to suspect that Isolde may not be entirely faithful and asks Tristan. Tristan assures his adoptive father that his wife is loyal and tries to break it off with Isolde, burning their meeting place. She still insists that they love each other and must be together somehow.

The coronation arrives and the men ride out, as an old tradition. Wictred leads them to Tristan and Isolde. The barons abandon Marke and he’s forced to arrest the young couple. Isolde comes clean. Just as the Irish are at the castle’s gates, Marke lets them go. Tristan has Isolde get in the boat, then pushes it away. He stays and helps fight. Mellot, hoping that Wictred will show him more respect, shows the traitor the secret tunnel. He’s cut down for his trouble and realizes his error. Tristan uses the same tunnel to sneak behind the Irish, rallying Marke and his men with his timely arrival. Another fight with Wictred, Wictred landing mortal blows, but Wictred falls to Tristan’s sword first. Marke confronts the barons: “there is no middle ground! Slay us, or slay him [Donnachdh].” Fights break out among the opposition. Tristan has Marke take him to the river and Isolde brought. The movie ends with Tristan’s death; Isolde apparently buried him then disappeared. Their love did not bring down a kingdom, like they feared. Legend says that Marke was victorious and reigned in peace until the end of his days.

For being so excited for this movie in high school, it’s fallen on my list. I see the definite influence for the Lancelot-Guinevere-Arthur triangle (which is about my least favorite aspect of Arthurian legend). The movie drags. I connect more with the emotions of Marke than either Tristan or Isolde. It took me several viewings for me to completely understand the storyline. It’s a dark film; as in, there aren’t many sunny scenes. Those that are sunny have a layer of clouds. At the end of this last viewing, I found myself craving a return to Musketeers.

In 2009, Great Lakes Medieval Faire’s theme was the court of Arthur. It was probably the second year I had gone and I remember hearing all the characters on cast and happen to mention “I wonder if they have Tristan and Isolde?”…within hearing of Merlin. Merlin brought the woman playing Isolde over to me. (A few years later, they did Romeo and Juliet and being early to the dance, I was ensured a partner: Puck. I had a wonderful time and that was when I decided I wanted to be on cast someday). It’s funny to watch some of the older videos; because now I recognize people. Oh, hey, I know Morholt (who shouts “For Ireland!” at the end of the match. Arthur says he owns that too…no you don’t). I actually know Puck. And Mordred. And Guinevere.

Next Time: The Last Legion