Based on the book, which I believe I actually read before I saw the movie; a friend lent it to me in high school to demonstrate how to write dueling scenes. Since I had already fallen in love with Lord of the Rings by that point, I just take it as a fun medieval/fantasy story. I have friends who dearly love the movie. Billy Crystal appears in the film as Miracle Max. Fred Savage, older brother to Ben Savage (Boy Meets World) is the grandson. Andre the Giant plays the giant Fezzik. Robin Wright who played Buttercup, kicks butt in the 2017 film Wonder Woman as General Antiope. This is probably Cary Elwes’s most famous role as Westley, though he’s gone on to play Lord Arthur Holmwood in Bram Stoker’s Dracula (I’ve seen parts of it), starred as Robin Hood in Men in Tights, played against type as the villainous Edgar in Ella Enchanted and I guess is now part of Stranger Things (no, I am not going to watch the show; I’ve fallen into too many fandoms as it is).

This is a case of a story within a story; the premise is that a grandfather reads this story to his grandson when his grandson is sick. The tale opens with a beautiful young girl named Buttercup, who torments the farm boy Westley, ordering him about. He always responds with “as you wish.” One day, Buttercup comes to realize that he is secretly telling her he loves her. She then realizes that she loves him; they are true loves. (Fans picked up on this notion in Once Upon a Time, when Hook tells Emma “as you wish,” when she orders him to wait after they share a searing kiss.) Westley leaves to seek his fortune so he could marry Buttercup, but word comes that his ship was attacked by the Dread Pirate Roberts, who never leaves survivors. Five years pass and Buttercup is now raised to a princess and engaged to marry Prince Humperdinck. But she does not truly love the prince. She is abducted during one of her daily rides the day of her engagement announcement by Vizzini, Inigo, and Fezzik. They have orders to kill her and blame it on a neighboring kingdom, thereby starting a war.

First, they set sail. Inigo notes that they are being followed. “Inconceivable!” Vizzini declares (Inigo later points out: “I do not think it means what you think it means.”) Buttercup attempts to escape by jumping overboard, but the water is filled with shrieking eels. They next come to the Cliffs of Insanity; only Fezzik is strong enough to climb, they should lose their tail. Nope, a man in black makes his way up the cliffs as well. Vizzini cuts the rope, but still he persists. Inigo is left behind to deal with him. It is a rather fantastic duel; both are gentlemen about it, Inigo even helping his opponent finish the climb and giving him a chance to catch his breath. (Behind the scenes notes state that the actors performed the duel themselves, tutored by legendary sword masters). We learn that Inigo is hunting for a six-fingered man who killed his father. The man in black wins after a dizzying circle of his sword, knocks Inigio out and continues. He faces Fezzik next and manages to choke him asleep, after being rammed into a rock a few times. 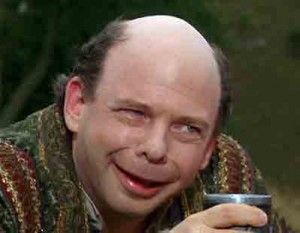 Finally, the man faces Vizzini in a battle of wits. He pours iocaine powder into a goblet and Vizzini is to guess which one. Vizzini is a smug man, believing he is smarter than any famous philosopher. Then he relies on a simple trick to switch goblets, thinking he’s won. The man in black was more cunning; he put powder into both goblets, but he’s spent the past several years building up an immunity to it. He then pulls the princess along, even though Humperdinck is tracking them.

Buttercup admits to her new captor that she does not love the prince; her first love was killed by the Dread Pirate Roberts, whom the man admits he is. Then admits he remembered the lad, but calls Buttercup out for being unfaithful, moving on to Humperdinck. “I died that day!” she declares. Humperdink is close; she pushes the man in black down a hill, telling him “you can die for all I care.” “As you wish,” the man stutters down the hill. She realizes it is her beloved Westley and follows him down the hill. Westley’s mask is now off, revealing it is the same man. They take refuge in the Fire Swamp to evade Humperdink, facing bursts of fire, lightning quick sand, and R.O.U.S (Rodents of Unusual Size, which are creepy and remind me in hindsight of creatures from Merlin). Westley is injured in a fight against a rodent. When they emerge from the Fire Swamp, Humperdinck is waiting for them. Westley is all ready to return to the swamp to protect Buttercup. But she sacrifices her happiness so Westley won’t be killed. Humperdinck promises his fiancée that he will not harm Westley and will return him to his ship. He takes his bride-to-be back and rides off. Westley makes eye contact with Count Rugen; they both know the prince is lying. Interestingly enough, the Count has six fingers on one hand.

Rugen takes control of Westley and plans to torture him on his machine, which sucks the life out of people. Buttercup in the meantime has decided she cannot marry the prince; she loves Westley and will be reunited with him. Humperdinck then promises that he will send word to recall Westley, but if that does not come to fruition, Buttercup will still marry him. In truth, he was the one who had hired the trio to abduct and kill Buttercup; now he plans to murder her on their wedding night; still planning to blame another kingdom and start a war.

Fezzik is reunited with Inigo before the wedding and they decide the break the man in black out, discovering that he is the princess’s true love. Except Buttercup has figured out that Humperdinck never followed through with his promises. She believes that Westley will still come for her and calls Humperdinck a coward. Humperdinck is enraged and cranks Rugen’s machine up to fifty, killing Westley. Everyone can hear his scream. Fezzik and Ingio recover Westley and buy a miracle; they need his brains to sneak into the castle so Inigo can have his revenge. It works only because Westley is “mostly” dead, compared to completely dead. Miracle Max creates the pill to get back at Humperdinck for firing him.

Our heroes storm the castle with some illusions, breaking up Buttercup and Humperdinck’s wedding (the priest has a hilarious manner of speaking), though Humperdinck gets the priest to declare them “man and wife.” Rugen faces off against Inigo, who simply advances on the man despite his wounds declaring “My name is Inigo Montoya, you killed my father. Prepare to die.” Buttercup, despaired that she is married 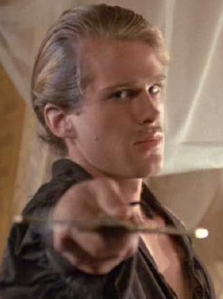 to Humperdinck and Westley is dead, per Humperdinck’s word, decides she will kill herself before Humperdinck reaches their marriage bed. But Westley is waiting for her. He is still not back to full strength but gives the prince an epic speech; they will fight to the pain and Westley will leave his ears so the prince can hear every word against him and his promised hideousness. He stands and orders the prince “Drop your sword.” Humperdinck complies and Buttercup ties him up. Inigo finds them and Fezzik is waiting with horses. Westley and Buttercup share the most epic kiss that has ever been recorded.

The boy decides that he doesn’t mind the kissing and maybe his grandfather will read him the story again tomorrow.

There are times this movie reminds me of Mel Gibson’s work, or a bit of a spoof on traditional fantasy movies. Maybe it’s the inclusion of typically comedic actors. Vizzini is a laugh, there’s a little bit between Miracle Max and his wife whom he calls a witch. Maybe it’s the fact that it simply includes a lot of typical fantasy elements, presented straight forward, without trying to add anything. Buttercup is admittedly not a simple damsel in distress. She does try to help Westley fight off the giant rat, after standing there most of the time. They speak of true love often and I can see it once Westley and Buttercup are separated, but not so much while they’re growing up. Westley is an excellent, dashing hero. The costumes are over all fine; but those huge crowns are ridiculous. There is admittedly some epic dialogue. At the end of the evening, a fun movie to put on, not something that needs to be processed deeply.

I’d love to hear from anyone who truly loves this movie as to their reasons, since I didn’t really connect with it.  Maybe I found it too late to completely fall in love?